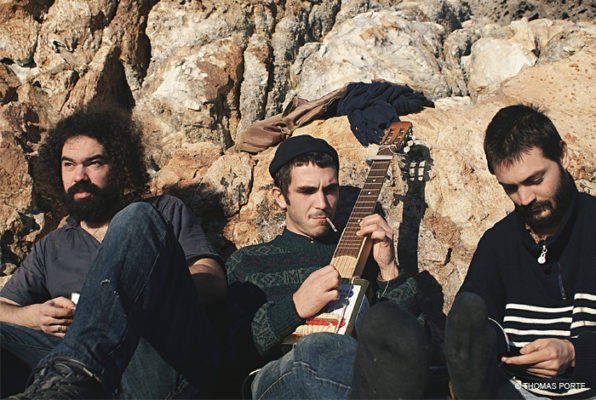 The Bégayer trio adds its incredible repertoire to our catalogue, between dismembered rock, imaginary traditions and avant-garde songs. Let’s celebrate with dignity at a breathtaking garden party at the Musée des Beaux-Arts in Tours on the 16th (and it’s free)!

French songs, noises, rumours of ancient and distant music, handmade instruments, modified transistor radios and other old electronic objects, Bégayer is looking for a gesture for those without folklore, for the offspring of this culture of scarcity, born as much from the twilight of the popular habitus as from the noisy howls, from the public squares of the villages as from the swarm of digital streams, for a new kind of rapsode-methods.

We can see the culture of lack as a cruel joy, the occasion for a communion between the staggering interpretation of ancient gestures and present attempts, it is a question of constructing singular variations and overflows.

Thus each stuttering song would like to be a disturbing and joyful object, whose obstinacy and cruel simplicity offer themselves as manifest objects of agitation, as distances to be experienced, as studies that look at us.