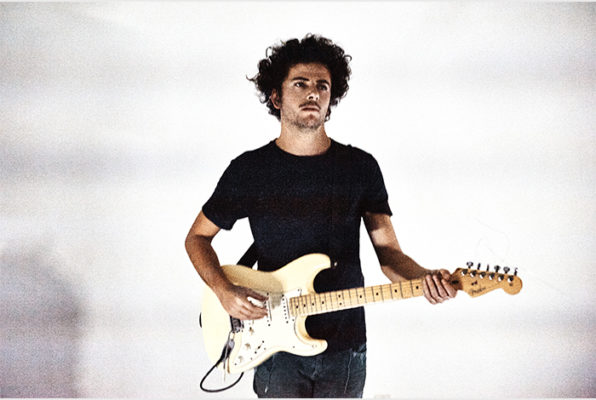 We are pleased to announce that Julien Desprez joins the ranks of the Murailles Music catalogue today! You can hear it without seeing it… Julien Desprez in his creation Acapulco Redux, makes his own guitar disappear, plays tap dance with his pedals, understands like a beast that the visible is the hidden, for an ultra-sounding stroboscopic experience. You will find the first concerts to come below.

Julien Desprez will fly to Brazil in December to create a new creation with Arto Lindsay and his guests. This new creation proposes a layering, folding, samba and noise music and will be presented at the CMC festival in Salvador de Bahia on December 14th. Composed of Arto Lindsay on guitar and artistic direction, Julien Desprez on guitar and artistic direction, Thiago Nassif on guitar and the Bahian percussion group Ilê Aiyê, this hybrid orchestra creates a link between the Afro-Brazilian Yoruba tradition and urban experimental culture. Julien Desprez will also take the opportunity to feed his new creation Coco during a research residency around Samba de Coco.

Julien Desprez plays electric guitar. This young French musician plays with a salutary spontaneity and many internal and external modifications on his instrument. Playing with his microphones, transforming the sound with pedals; it seems like his hands are tap-dancing on the chords. His live tracks sound like cut-up sounds, close to the so-called glitch music; reminding us of the Quebec techno producer Akufen alias Marc Leclair, with whom he shares the taste of jolting: his body almost dances when he plays and the relationship he has with his guitar can evoke the actions of a magician who would have hypnotised a tiger trainer.

‘Acapulco’ was born from a concept: to develop a musical form capable of receiving and bringing to life all sounds, from any field or musical aesthetic.

This idea led to an electric guitar solo which makes these different sound elements collide. An unconventional approach to the guitar, which evokes a dance, has been created by a mix of manual actions on the instrument coupled with footwork on the effect pedals. The body thus became central to ‘Acapulco’’s artistic quest.

The current aim is to build on this singularity in order to take it further. We focus our attention on all the elements which characterise our approach and have settled on radical lighting to extend ‘Acapulco’’s aesthetics: three very powerful and reactive white LED bars create an electric, electronic light that supports the musical meaning. Julien operates these three lamps with pedals, controlling the very simple, sliced, incisive light effects directly from the stage, as he does his music.