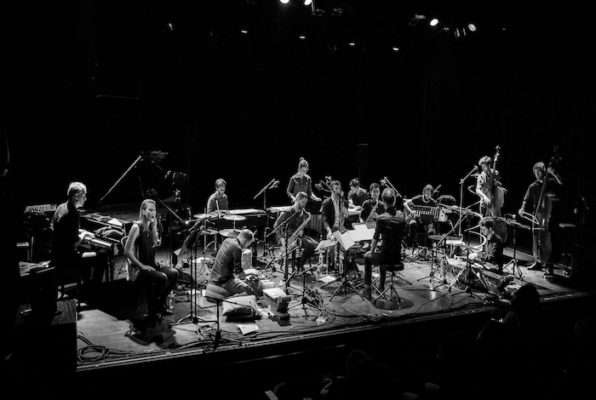 AUM is the sacred syllable of the Hindu religion. It would mean something like ‘I currys’, and would represent all at once – the divine verb in an audible form, the Fire of the Sun ; Unity, Cosmos, the vastness of the Universe ; the past, the present, the future ; the whole of Knowledge. It would also contain the very essence of all the sounds that have been, are, or will be uttered.

Since 2010, AUM Grand Ensemble, hybrid band between a chamber orchestra, a big band and an ultra-modern gamelan – in the sense of set of resonant instruments that Olivier Messiaen defined – reflects upon a kind of common source of different music traditions – from Renaissance’s musics to the musics of Morton Feldman, Ligeti, Grisey or LaMonte Young, and those, ancestral and innumerable, from Asia. The source of a certain physical, organic sensibility to the sound matter. A music in which composition and improvisation are constantly serving each other, guided by the search of  a living, shifting sound – a music about masses, timbre melting, textures, about processes more than events, reflecting upon the role of the voice, evolution of continuous matters, long forms, non-temperated tunes, the acoustic phenomenon of beats, resonant, silence…

PRESS
Franck Bergerot
”Stunning beauty.”
Franpi Barriaux
“Julien Pontvianne knows how to stretch the sounds when it’s about their rough essence, their vivacity, their depth. (…) a daydream who brings you literally in unsuspected dimensions.”
Ludovic Florin
”Extraordinary aesthetic shock. AUM’s music appears just as sensual as it is highly conceptual. It drives us away, very far beyond ourselves, in a voluptuous world of sounds from which we come back changed. Closed to a ritual, allowing time to time, this music is similar to a real purifying bath.”
Denis Desassis
“A music of a discreet but implacable power – that creates the unspeakable and alters all the benchmarks. The feeling to reach a somewhere without a name emerges. Julien Pontvianne and his musicians hold the time at their fingertips, compress and stretch it according to their will.”
LINKS :